ZTE Nubia Red Magic 7 is one of those few phones that barely has any cons. The phone was first announced on the 17th of February 2022 and released just four days later on the 21st. The device comes at a starting price of around €630 which approximately converts to $706, and it has six variants. The base variant has 8 GB of RAM with 128 GB of internal storage. Two of the variants have 12 GB of RAM with 128 GB and 256 GB of ROM.

The other three variants have as follows: 16 GB RAM with 256 GB ROM, 16 GB RAM with 512 GB ROM, and 18 GB RAM with 256 GB ROM. The device doesn’t support an SD card but does have room for two Nano-SIM cards. ZTE Nubia Red Magic 7 can handle connections from 2G to 5G. For colors, there are three options, namely Obsidian, Pulsar, and Supernova. The phone has a very memorable look, and it’s tough to find a phone that looks quite like it.

The phone’s build quality is top-notch as it has a glass back with an aluminum frame. It measures 6.72 by 3.08 by 0.37 inches and weighs in at 215 grams. The weight does fall on the heavier side, but that was expected considering its specifications. Furthermore, it has pressure-sensitive zones and a built-in cooling fan, which helps deliver a superb gaming experience. This is anticipated from a high-end gaming smartphone. The GPU, Adreno 730, and the 165 Hz screen refresh rate certainly add to the experience.

The overall performance delivered by the Qualcomm SM8450 Snapdragon 8 Gen 1 processor is expectedly great. Coming to the software, the device runs the latest Android 12 with Redmagic 5.0 on top. Your multimedia experience on the ZTE Nubia Red Magic 7 should be quite good. The phone has a 6.8-inch FHD+ AMOLED screen which has an aspect ratio of 20:9. The gadget has a screen-to-body ratio of 83.3% and a PPI density of 387.

The device can go up to 700 nits of brightness so that you have no issues using it outdoors. The multimedia experience is also improved by the presence of high-resolution audio and stereo speakers. As for the sensors, the device has all the usual ones. Coming to the battery, ZTE Nubia Red Magic 7’s performance is pretty good. The phone has a 4500 mAh lithium polymer non-removable battery that supports 65W fast charging.

If you are an average user, you should get around two days of use out of it. What’s even better is that the device can go from 0 to 100% of charge in just half an hour, which is super impressive. For communication, the phone has USB Type-C 3.0, USB On-The-Go, GPS, Bluetooth 5.2, Wi-Fi dual-band, Wi-Fi Direct, and hotspot. The phone has NFC support but lacks FM Radio. One of the other major downsides of owning this ZTE Nubia Red Magic 7 is its average camera performance. 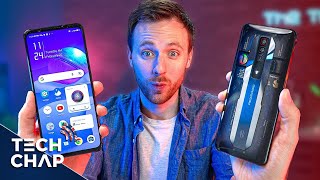 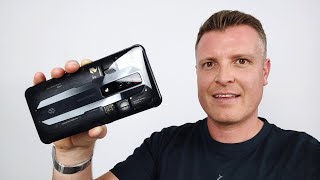