Fujifilm really made us feel like it’s the 20th century all over again. Fujifilm X100F brings a touch of old feel when it comes to design, coming in two versions, Black, and a mix of black and silver. But if you’re scared the specs of Fujifilm X100F under the hood look and feel outdated, you’d be wrong. This one has brought what could possibly be the biggest upgrade when it comes to comparison with the previous model. The build feels premium, and in no way cheap, and with that in mind it has never been easier to use.

Now let’s take a look at just what Fujifilm X100F has to offer. First of all, they even shifted the buttons on the back to the right side, so the camera can be comfortably used with one hand. You’re also getting a small joystick/level on the back, to help you set up a focus point much easier and faster. That, of course, is not all there is to it. A huge jump from the previous model is the image sensor resolution. Fujifilm X100F now sports an APS-C X-Trans CMOS III sensor with 24.3 million of pixels. That ensures the picture is not only crystal clear but big in size as well.

Speaking of size, and judging by the 24.3 MP, you can expect an image to be at 6000 x 4000 resolution. That’ll make cropping an image to your liking a really pleasant experience, as you can simply remove the excess part. Now we’ll have to disappoint you, as video recording isn’t exactly the best feature of Fujifilm X100F. You’re going to shoot videos at Full HD (1920 x 1080) resolution only with this one. We might’ve expected a little more from this one, as the competitors casually come equipped with 4K resolution recording. For this reason, we wouldn’t call this one a videographers’ favorite.

On the positive side, and with the price of Fujifilm X100F in mind, which is $1249, you can expect other features that are quite good. For example, this series has always been very well-known for its viewfinder. It’s hybrid and allows you to shoot in both electronic and optical mode. The fully electronic view is shown via a 2.36 million-dot OLED display. Should we say more? OLED display will certainly make sure you’re getting the right picture, without a cold shower when you open it on your PC. You’re seeing exposure, white balance, composition and other shooting info exactly as they are. For more traditional users, optical viewfinder provides the classic experience.

Given these points, you might already paint a picture of what Fujifilm X100F represents. It is a compact camera with great image shooting capabilities. You’re getting an LCD 3-inch display on the back, which is a standard one for cameras of this price range. Regardless of that, it’s still bright and sharp and will allow you to take a quick look at photos you’ve taken. Even though you don’t have a low-energy Bluetooth connectivity or NFC, the camera is still Wi-Fi enabled by default. All you need is the right app, and you’ll transfer your photos in seconds. 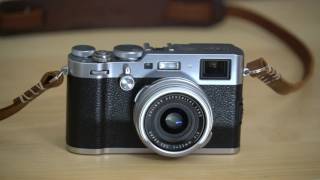 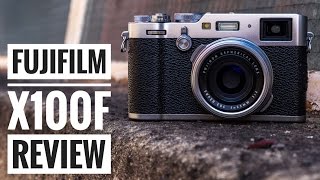