Oppo K10 is a good option if you are looking for a balanced mid-range phone that performs well in most departments. However, its strength lies in its battery life and display quality. The phone was first announced on the 23rd of March and released six days later on the 29th. The device comes at a starting price of about €180 which approximately converts to $200. It has two variants. The base variant has 6 GB RAM with 128 GB ROM while the higher-priced variant has 8 GB of RAM with 128 GB of ROM. The device has a dedicated card slot that can house an SD card and two Nano-SIM cards.

It can support connections from 2G to 4G. For colors, you get to choose between Black Carbon and Blue Flame. The build quality of Oppo K10 is quite good. It has IP54 certification for dust and water resistance and doesn’t pick up fingerprints easily, as well. You will find the text “Super Performance” and “10-K” on the phone’s back, which is one of the more unique things about its design. Oppo K10 is lightweight at 189 grams. Coming to the dimensions, it measures 6.47 x 2.98 x 0.33 inches. Its display quality and multimedia experience are awesome.

The device has a 6.59-inch FHD+ IPS LCD screen with a refresh rate of 90 Hz. Its screen-to-body ratio and PPI density are 84% and 401 respectively. Additionally, the phone can go up to 600 nits of brightness. With that said, you should have no issue using the phone outdoors. The presence of a loudspeaker and a 3.5 mm headphone jack only adds to the multimedia experience. It misses out on stereo speakers, though. The Qualcomm SM6225 Snapdragon 680 4G delivers decent overall performance. The phone’s gaming requirements are handled by the Adreno 610 GPU.

Moving to software, the device runs Android 11 with ColorOS 11.1 on top. When it comes to sensors, the phone has an accelerometer, proximity, compass, and a side-mounted fingerprint sensor. The cameras turn in a good overall performance, provided there’s ample lighting around. It doesn’t do well in low-lighting conditions, but so is the case with most budget mid-range phones. It has a triple camera setup on the back. The phone has a 50 MP wide-angle, 2 MP macro, and depth sensor camera on the back. For selfies, the Oppo K10 has a 16 MP wide-angle camera. The phone has all the usual camera features and can record videos in 1080p@30fps.

For communication, the phone has dual-band Wi-Fi, Wi-Fi Direct, Hotspot, Bluetooth 5.0, GPS, USB Type-C 2.0, and USB On-The-Go. It not only lacks NFC but FM Radio as well, which is shocking. As previously mentioned, the device’s battery life is superb. With moderate usage, the phone should last you around two days on a complete charge. The phone has a 5000 mAh lithium polymer non-removable battery that supports 33W fast charging. If the ads are to be believed, the device can go from 0 to 50% of charge in 26 minutes, which is nice to see. Additionally, the Oppo K10 supports USB Power Delivery and reverse charging. 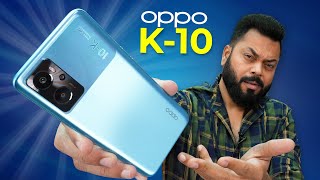 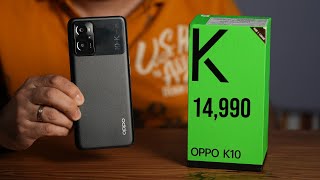