As of the 8th of April 2022, the Samsung Galaxy M33 is the latest phone to be released by Samsung. The phone was announced four days prior, and it comes at a starting price of €299 (approximately $324). It has two variants. For RAM, you get to choose between 6 GB and 8 GB, but the internal storage of 128 GB stays the same. What’s disappointing to see here is that the device uses eMMC 5.1 storage and not UFS. eMMC storage is acceptable when used in budget phones, but at this price, it’s not. Mid-range phones often lack an SD card slot, but that’s not the case here.

It has a dedicated card slot, for which Samsung deserves credit. Besides an SD card, the phone can handle two Nano-SIM cards and connections from 2G to 5G. For color, you get to choose between Green, Blue, and Brown. The phone has an elegant look, while it could be argued that it isn’t unique. The Samsung Galaxy M33 has a gorgeous plastic back, but it is a fingerprint magnet. So, that’s bittersweet. The phone is 6.51 inches tall, 3.03 inches wide, and 0.37 inches thick. It weighs 198 grams, which isn’t too heavy or light. On the front, the phone has a 6.6-inch FHD+ TFT LCD screen protected by the Corning Gorilla Glass 5.

The phone has thick bezels on top and bottom, so it’s no surprise that the phone’s screen-to-body ratio is 82.5%. Its PPI density is 400. The Samsung Galaxy M33’s display quality and multimedia experience are average. Samsung’s phones are often praised for their AMOLED screens. However, that’s not the case here. To see the company provide a TFT LCD screen instead of an AMOLED screen, at this price, is disheartening, to say the least. In the sound department, the phone has a loudspeaker and a 3.5 mm headphone jack but lacks stereo speakers.

It’s also worth mentioning here that the audio output from the speaker doesn’t meet expectations. Therefore, it’s better to use it with earphones. On the bright side of things, the device has a 120 Hz refresh rate, which not many competing phones offer. Moving from one bright side to the other, the Exynos 1280 delivers great performance. This is the greatest strength of the Samsung Galaxy M33. The Mali-G68 GPU looks after your gaming experience. On the software side of things, the device runs Android 12 out-of-the-box with One UI 4.1 on top.

The phone will get major Android updates for two years and security updates for a couple more years. This is great, as there are phones that get no promise of updates whatsoever. Another department where the phone shines is the battery, as the phone has a 5000 Li-Ion, not Li-Po, non-removable one. It supports reverse charging and 25W fast charging. If you’re an average user, the Samsung Galaxy M33 should last for more than one and a half days.

For communication, the phone has USB Type-C 2.0, USB On-The-Go, GPS, Bluetooth 5.1, dual-band Wi-Fi, NFC, Wi-Fi Direct, and Hotspot. Coming to cameras, the main camera performs well, but the others don’t. The phone has a 50 MP wide-angle with PDAF, 5 MP ultrawide, 2 MP macro, and depth sensor camera on the back. For selfies, the phone features an 8 MP wide-angle camera on the front. The rear camera setup can record videos up to 4K, while the selfie camera is limited to 1080p. The Samsung Galaxy M33 has all the usual camera features and sensors. 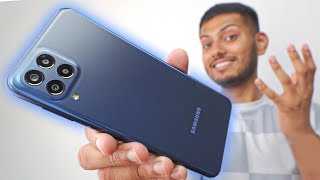 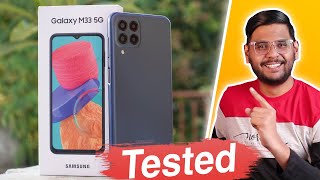